Garzanti have just published the Italian translation of The Company of Shadows. It's called "Cattive Compagnie" ("Bad Company") and is out now!
Posted by Ruth Newman at 09:23 1 comment:

Review in The Times!

How exciting to get a review in The Times ... entertainingly, only found out about it when Guy Saville, whose book The Afrika Reich was reviewed in the same issue, friended me on Facebook!

Ruth Newman’s The Company of Shadows is a tragic love story evolves into a missing-person mystery, then a murder hunt that reaches a bloodthirsty climax in a twisting tale of confused identity and morality.

Londoner Kate has been mourning her dead husband for a year when she sees a man who looks identical to him in her friends’ recent holiday photos. She sets off in search of this improbable twin, first to Miami, then to Sicily, the scene of his death by drowning.

Every step she takes is watched, and anyone she approaches either threatens her or ends up dead, as Kate’s unanswered questions about her husband’s fate drag her ever deeper into a web of danger and deceit.

Topically enough, the finale involves America’s leading Mafia families in a cinematic Las Vegas, where ends that have been twisting in myriad directions are cleverly tied together. 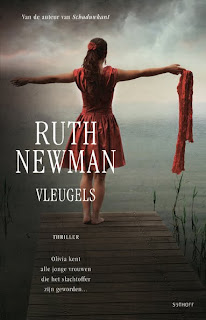 I'm happy to say that the Dutch translation of The Company of the Shadows, "Schaduwkant", has done quite well in the Netherlands and so the publishers, Sijthoff, have decided to rerelease Twisted Wing.
Previously Vleugels van Angst ("Wings of Fear"), it will now be called simply Vleugels (erm, "Wings" - but you'd worked that out, hadn't you? You're clever), and as you can see, the proposed cover is quite a departure from the previously rather punky version! I think it's Olivia going "where's my fecking punt then?!" Very pretty...
Posted by Ruth Newman at 08:45 5 comments:

Flicking through her friends' Miami vacation photos, Kate Benson receives a sudden shock. For there in the background is her husband, Charlie. Dark hair, blue eyes, familiar smile: there's no mistaking him. But that's impossible. Because Charlie died exactly a year ago. THE COMPANY OF SHADOWS, published by Simon & Schuster, out July 2010.

"Reading gives us someplace to go when we have to stay where we are."
- Mason Cooley